What are you looking for today?
Investment Advice

What investors should ideally do during a recession?

byYash Jain May 23, 2022 0 comments
HomeInvestment Advice What investors should ideally do during a recession? 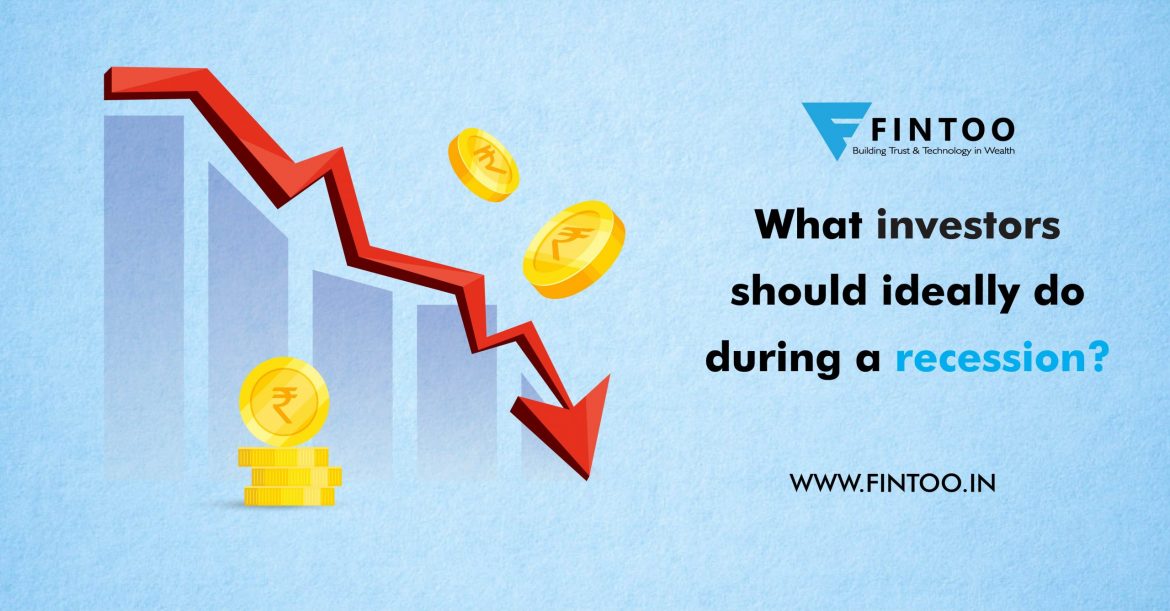 The rupee had closed at a record low of 77.72 against the dollar on Thursday, losing over 6% in the last year, due to headwinds like rising inflation, increasing interest rates, and foreign institutional investors’ outflows and plunging markets over some time.

The depreciation of the rupee is expected to impact the economy, by and large, especially imports and push-up inflation. This also leads us closer to the concerns of a recession.

A recession is a period of declining economic performance across an entire economy lasting for several months and generally marked by two consecutive quarters of economic decline highlighted by the GDP growth rate.

We have seen a quarter of negative growth and might witness another such quarter due to geopolitical uncertainties. Alongside, the current scenario of inversion in the yield curve when the yields for short-term debt are higher than long-term debt for the same credit quality, which in the past has proven to be a relatively reliable lead indicator of a recession.

This can be indicative that there could be a likely possibility of a recessionary phase.

But, if recession actually occurs, should it be a daunting fact?

Not necessarily, as the recession is just a part of the economic cycle that, needs to be dealt with well by the economic participants.

The first and foremost important thing would be to safeguard and underline the need for emergency funds to tackle the concerns related to brief unemployment or any other unforeseen exigencies.

The second most important aspect would be to reduce debt and liabilities, as it could be a scenario where heavy debt could face a double whammy of rising interest costs and lesser scope of beating the inflationary pressure.

Historically, many investors have stopped with their systematical investment plans (SIP) in the past during the recessionary phases. Rather, investors should continue with their systematical investment plans (SIP) into fundamentally sound companies and mutual funds.
It would not be a bad idea to allocate a specific ratio of wealth into short-term fixed income opportunities like term deposits, spanning across one-three years horizons to take care of shorter-term needs.

Simultaneously, when interest rates will rise over a specific span, it could be a good idea to accumulate investments into debt mutual funds and bonds in a staggered manner to realize higher appreciation over a longer period.

During a recession, investors need to be cautious and vigilant while monitoring the economic environment and equity markets for opportunities to identify high-quality businesses at attractive valuations, as these could be the best periods of accumulating opportunities for longer-term significant growth.

Investors should definitely refrain from highly leveraged, speculative, or cyclical assets in nature since they could potentially be exposed to default risk due to pressures of rising interest cost and inflation simultaneously.

Rather, it would be a great bet to pick up proven businesses having strong balance sheets, good cash flows, low debt, and operating in industries that have a proven track record of holding up well during difficult economic conditions.

Recession or no recession will only unfold with forthcoming events. But definitely, the investors could manage both scenarios well while following a disciplined balance of all the aspects of personal wealth.

A financial planning platform where you can plan all your goals, cash flows, expenses management, etc., which provides you advisory on the go. Unbiased and with uttermost data security, create your Financial Planning at Rs99/-