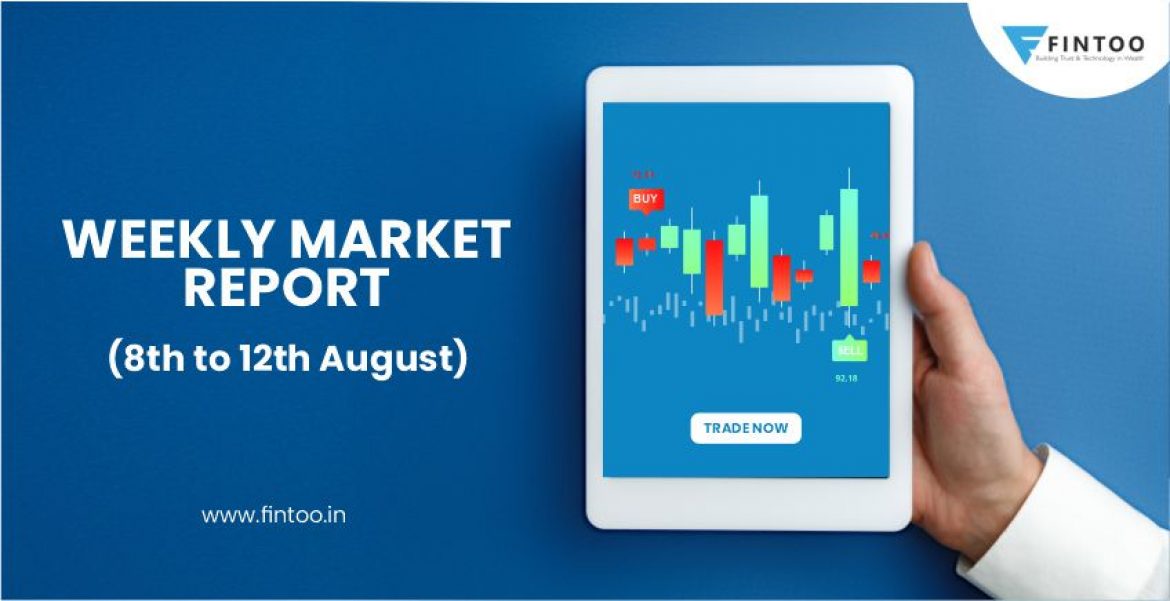 Global sentiments were upbeat as traders reacted to the US Labour Department report showing an unexpected decrease in producer prices in the month of July, raising hopes that inflation in the US may have peaked. This raised expectations that the Fed will slow the pace of interest rate increases.

Domestic sentiments got boosted with a private report stating that India will be the fastest growing major economy this year and the next despite headwinds from rising inflation, widening trade deficit, and a declining rupee. For the week, FIIs were net buyers to the tune of Rs 7850 crores while DIIs were net sellers to the tune of Rs 2477 crores.

Airline stocks were in the limelight as govt lifted domestic airfare caps. The Union Aviation Ministry said that limits imposed on domestic airfares will be removed from August 31, after a span of approximately 27 months.

The Telecom industry’s stocks remained on watch as Minister of State for Telecom Devusinh Chauhan said the long-awaited high-speed 5G services are expected to be rolled out in about a month. Chauhan said India is likely to deploy indigenously developed and manufactured 5G telecom gears by end of this year for 5G services.

Insurance industry stocks were in focus with IRDAI data showing that new business premiums (NBP) of life insurance companies jumped 91% year-on-year (YoY) in July, thanks to strong premium growth of state-owned Life Insurance Corporation (LIC). According to data released by the IRDAI, life insurers reported an NBP of Rs 39,078.90 crore in July.

Sugar industry stocks were buzzing as the government relaxed the quantitative restriction of 10 million tonnes on sugar exports and allowed shipments of an additional 1.2 million tonnes in the current marketing year ending September.

RBI has tightened norms for digital lending to prevent charging of exorbitant interest rates by certain entities and also check unethical loan recovery practices. Under the new norms, all loan disbursals and repayments are required to be executed only between the bank accounts of borrowers and the regulated entities (like banks and NBFCs) without any pass-through/ pool account of the Lending Service Providers (LSPs).

Hindalco gained 6% after it reported a 47.8% rise in its consolidated net profit at Rs 4,119 crore for the first quarter ended June 2022 as against Rs 2,787 crore recorded a year ago. Consolidated revenue rose 40.3% YoY to Rs 58,018 crore, as compared to a revenue of Rs 41,358 crore. On a sequential basis, the profit has increased 7% from Rs 3,851 crore earned during the January – March period. This was by far the highest quarterly consolidated PAT for the company.

Bharat Forge rallied after its standalone EBIDTA was better than estimates, due to higher revenues. Demand outlook stays robust across key segments. Domestic verticals are on a strong footing. According to the management, its export business is now much more resilient than in the past cycles and global macro risks are unlikely to dent its growth prospects.

Tata Elxsi stole the limelight after its stock rallied past Rs 10,000 mark and reached Rs 10,200. During its Q1FY23 results, the Company said that it has a strong order book and enjoys a healthy deal pipeline across key markets and industries.  It is actively engaged with some of the world’s best-known automotive OEMs and suppliers for the development and deployment of future mobility.

On the macro-economic data front, USA CPI and PPI numbers were released this week. The market cheered as the CPI came in lower from earlier 9.1% to 8.5% indicating a cooling in inflation. Along with this, the PPI growth came in 0.5% lower on an MoM basis the first month-over-month decrease since April 2020.

Along with the US, China too reported its CPI & PPI numbers, which looked very grim. An increase in CPI by 2.7% and PPI by 4.2% indicated that bullishness in inflation continues while the bearishness view on GDP growth continues. This has caused investor sentiments to turn mildly hawkish in the short term.

Meanwhile, credit rating agency ICRA in its latest report has predicted that the inflation is likely to undershoot the Monetary Policy Committee’s Q2 and Q3 FY2023 projections modestly, with expectations of the first monthly sub-6% inflation print in Q3 itself, resulting in the agency’s full-year CPI inflation projection of 6.5%.

Market Outlook For the Coming Week – 16th to 19th August

For the coming week, markets will continue to focus on global cues and institutional flows for direction in a truncated trading week. With FII buying in spot and derivatives market, Nifty is now prone to a major short squeeze in the coming days as call writers would be forced to cover positions as weekly has come well above 17500. We expect a major upswing in Nifty above 17700 with Nifty Bank eyeing a target of 42000.