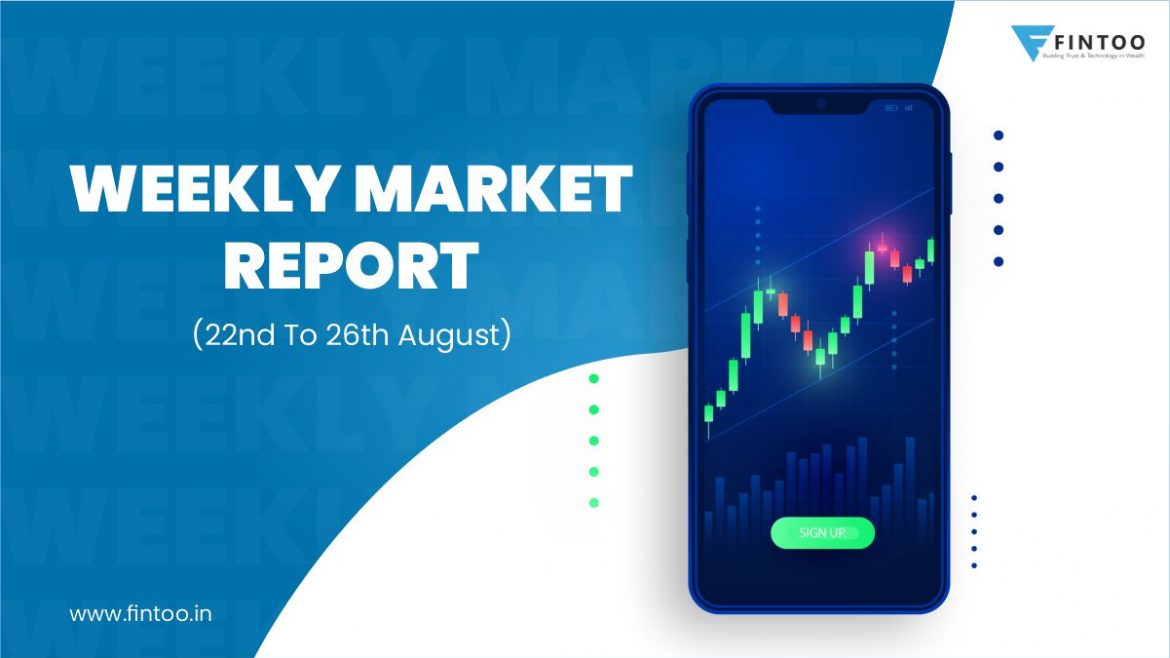 Markets extend gains, FIIs flows and earnings are in focus this week

Investors focused on the Federal Reserve’s Jackson Hole conference for clues about the central bank’s policy outlook in the week gone by. The Federal Reserve raised rates by three-quarters-of-a-percentage point in June and July.

Its next policy meeting is in September, and it is expected that the Fed will maintain its hawkish stance and raise rates by 75 bps. For the week, the Nifty ended down by 1.1% to 17,559 and the Nifty Midcap100 and Nifty Smallcap 100 index fell by 0.3% and 1.5% respectively.

On the global front, Euro-area economic activity declined for a second month, as record inflation saps demand and weakness seeps into more and more sectors. On the flip side, GDP data from the continent’s largest economy, Germany, had brought relief. News that the country had narrowly avoided a contraction in the second quarter also lifted the sentiments of the investors to some extent.

Chinese stock market moved higher after its government announced billions in infrastructure spending. Meanwhile, the Japanese economy rebounded at a slower-than-expected pace in the second quarter from a COVID-induced slump, while growing fears of a global slowdown are clouding the outlook for the trade-reliant nation.

Brent crude prices have bounced about 10% from its recent lows of USD 92 after Saudi Arabia floated the idea of OPEC+ output cuts to support prices in the case of returning Iranian crude and with the prospect of a drop in U.S. inventories. We continue to remain bullish on crude and expect it to rise back to its highs.

The long-term correction in Brent crude may be coming to an end and we may see a resumption of up move which can take prices to USD 200 a bbl. An ideal strategy to be applied in the next few days would be accumulating Crude ETF and may add long positions in USDINR simultaneously.

USDINR is seeing no major signs of reversal despite decline in brent crude prices and next upmove could be lined up towards 86.5 if prices clear hurdle of 80.5. Currently, RBI putting all efforts to force USDINR below psychological mark of 80 but global strength in USD could eventually trigger major depreciation in rupee.

Meanwhile, in an important development on the primary market front, API Holdings, the parent entity of PharmEasy, announced the withdrawal of the DRHP submitted for an IPO due to “market conditions and strategic considerations”. The company is committed to its growth and expansion plans, and is considering raising funds via a rights issue, the Company said in a statement. PharmEasy will now raise money through a rights issue.

For the coming week, the markets open gap down after Federal Reserve Chairman Jerome Powell commented that the central bank’s job of lowering inflation is not done, suggesting that the Fed will continue to aggressively raise interest rates to cool the economy.

The market will continue to take cues from the various global as well as domestic factors. FII flow will be watched as they have been net buyers recently while the DIIs are staying on the sidelines. On the macro-economic data front, India’s economic expansion for the quarter ending June would be announced on August 31.

Fiscal deficit and core sector data for July will also be out on the same date. Automobile stocks will be in focus as the companies will start declaring their monthly sales data for August. Markets after the recent sharp run may witness some consolidation before we see the next leg of upmove. The strategy will remain ‘buy on dips’ and accumulate quality stocks on every decline.