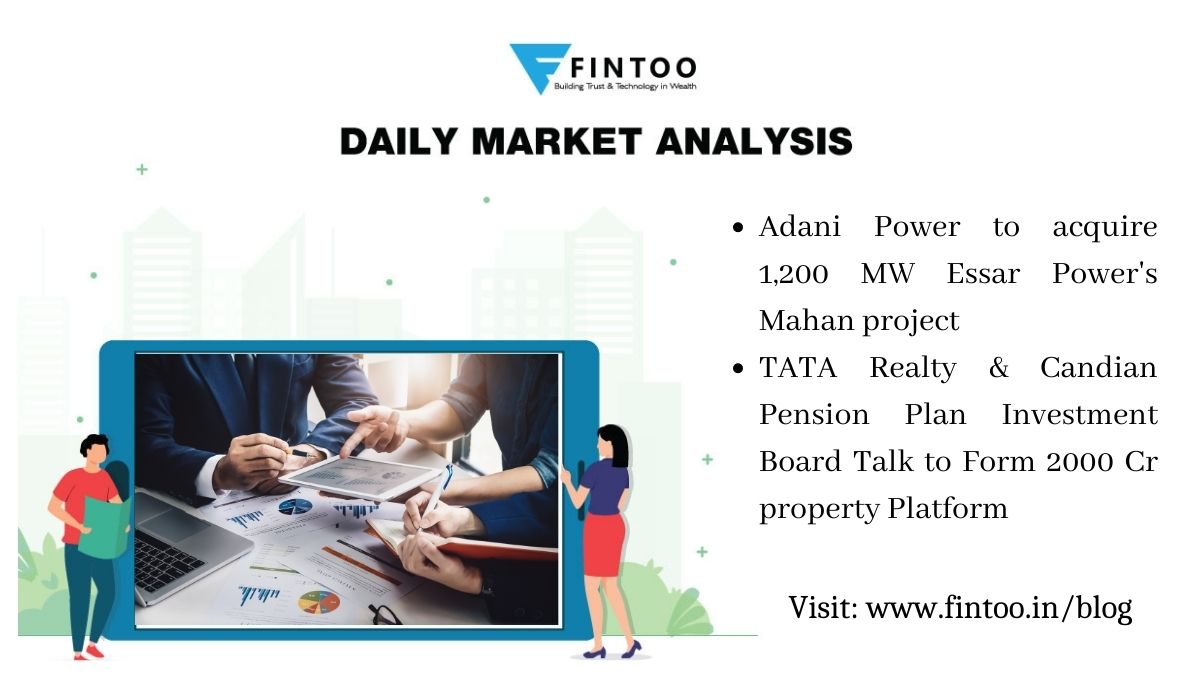 The country’s largest power producer in the private sector, Adani Power Limited (APL), will acquire the 1,200 megawatts (MW) Essar Power’s Mahan Project located at Singrauli district of Madhya Pradesh. According to industry sources, Adani Power will shell out close to Rs 3,000 crore for the Mahan Project.

TATA & CPPIB in advance talks to set up a commercial property development platform in India with a 2000cr equity base. Through this platform will be looking for greenfield assets to beef up the portfolio and brownfield commercial properties across the country.

Shares of Adani Group companies were in focus during Monday’s session, with four of the six listed stocks being locked in the upper circuit of 5 percent, bouncing back up to 11 percent from their respective intra-day lows on the BSE.

Last week, all Adani group stocks had come under pressure after a media report suggested that the National Securities Depository (NSDL) had frozen accounts of three foreign funds that own stake in four of Adani Group companies. Adani group companies as well as the NSDL had clarified that the Demat accounts of three foreign funds-Albula Investment Fund, Cresta Fund and APMS Investment Fund holding shares in group companies “are not frozen”.

Leading agrochemicals manufacturer India Pesticides is trading at a massive 34 percent premium in the grey market ahead of the opening of its initial public offering (IPO) which kicks off on June 23.

India’s passenger vehicle makers are ramping up production to recoup the output lost during the lockdowns since April, with market leader Maruti Suzuki expected to record its highest ever volume for a month in July.

Maruti Suzuki is scheduled to produce 198,000 units next month, industry insiders with knowledge of its plans said. They projected the July production volume of Hyundai Motor at 60,000 vehicles and Tata Motors at 30,000 units, taking the total expected output of the top three automakers alone to close to 300,000 units. 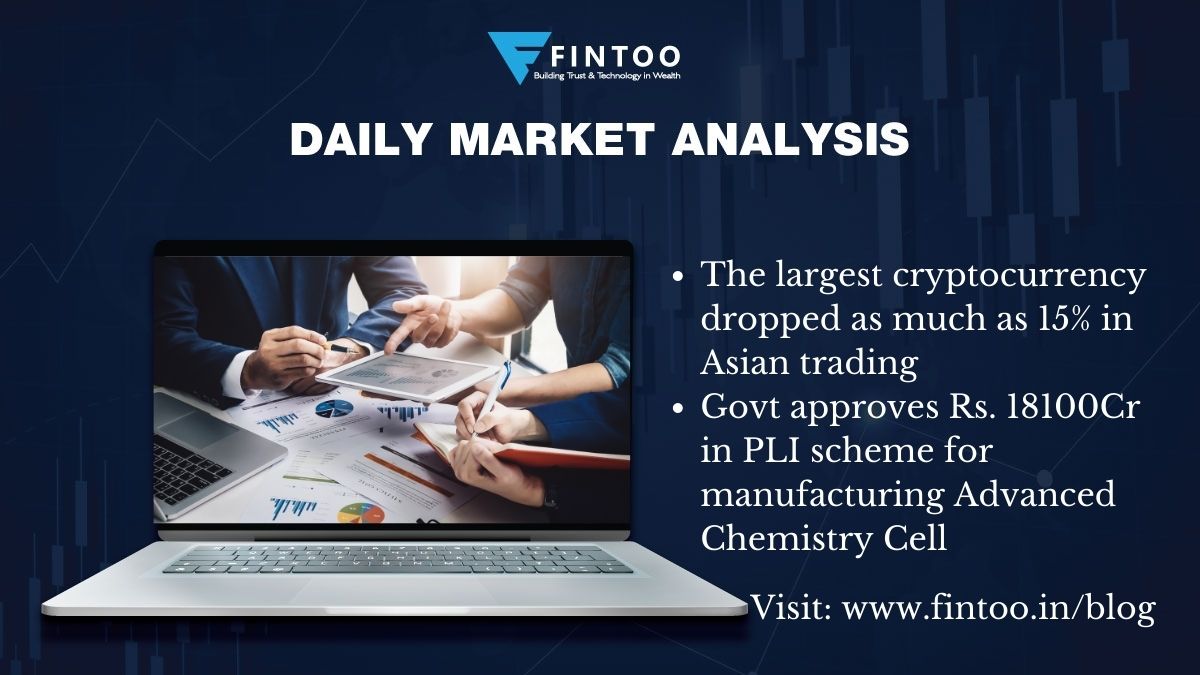 The proposal aims to achieve manufacturing of 50 gigawatts of battery storage, he said, adding, these incentives will be available to those companies having higher production and sales capability.

Advanced Chemistry Cell (ACC) are the new generation of advanced storage technologies that can store electric energy either as electrochemical or as chemical energy and convert it back to electric energy as and when required, an official statement said.

All the demand for the ACCs is currently being met through imports in India.

On Wednesday Godrej’s consumer share price surged by 21.87%. Godrej has underperformed most of its peers in the past few years, which may change as the new leader brings in a new strategy that may entail some hard decisions,

Sitapati, who has spent nearly 22 years with the Indian unit of Anglo-Dutch giant Unilever, was instrumental in building the company’s foods and refreshments business as one of the largest in the country, which also included the merger and integration of GlaxoSmithKline Plc’s Indian consumer-health unit with Hindustan Unilever.

Subscription for Sovereign Gold Bond open from May 17

The first tranche of Sovereign Gold Bonds 2021-22 will be open for subscription for five days from Monday 17th and end on 21st May and bonds issued on 25th May.

The bonds will be denominated in multiples of gram(s) of gold with a basic unit of 1 gram. The tenor of the bond will be for 8 years with an exit option after the 5th year to be exercised on the next interest payment dates.

Rallied over 13 per cent in early trade on Wednesday in a weak market, as the telco reported monthly user gains for the first time in 15 months.

While that user gain held out a ray of hope for investors, analyst after analyst has downgraded the stock and cut price targets, as uncertainty loomed over its much-awaited fundraising plans.

The deal is to sell one of the two business undertakings of ZAHL on a slump-sale basis as a going concern, for Rs 2,921 crore on a cash-free and debt-free basis, subject to certain closing date adjustments and other conditions.

Wednesday, Musk cited concerns about the “rapidly increasing use of fossil fuels for Bitcoin mining and transactions,” while signaling that Tesla might accept other cryptocurrencies if they are much less energy-intensive. He also said the company won’t be selling any of the Bitcoin it holds.

The largest cryptocurrency dropped as much as 15% in Asian trading, sliding below $50,000, before paring some of the drops. It was down about 8% to $50,190 as of 10:53 a.m. in Tokyo. There were reports of outages at digital-token exchanges as people rushed to sell.

Union Minister Nitin Gadkari said on Friday, that the much-awaited policy to scrap 15 years old vehicles is likely to get a government nod soon. The policy is for the scrapping of vehicles that are more than 15 years old and includes cars, trucks, and buses. This policy boosted the automobile sector by phasing out old and polluting vehicles. Mr. Gadkari said if the policy is approved, India will become an automobile hub and the prices of vehicles also reduce by using recycled materials from old vehicles.

India easing foreign investment rules for sectors ranging from construction to animation to lure overseas capital needed to create jobs. A proposal to allow through LLP models to invest in the construction of townships, roads, hotels, and hospitals is under discussion. In the budget, they also discuss 100% FDI in animation, visual effects, gaming, and the comic sector. The government estimates that India will require investment worth $777 billion across infrastructure development by 2022. This relaxation in rules is also likely to help the Modi government get closer to its target of creating affordable housing for all urban areas by 2022 and building smart cities.

Apple record sales in India in Last quarter of 2020

Apple had a record quarterly sales in India, crossed 1.5 million shipments in a single quarter for the first time ever, driven by the newly launched iPhone 12 and iPhone SE 2020. It’s the best year for Apple in India as annual sales volume exceeded 3.2 million in 2020, a 60% growth over 2019 sales.

The country’s most- valuable firm on Friday reported a record quarterly profit for the quarter ended on December 31, 2020, by 13% YOY growth in net profit to Rs. 13100 crore but they didn’t disclose gross refining margins, which accounts for about 70 percent of revenue in their business. The reason for this miss is difficult to ascertain, we reckon it was largely due to sustained refining weakness.

Steel prices will stabilize when global prices come down

JSW Steel joint managing director Seshagiri Rao said, steel price will stabilize once the global rates of steel come down. During the first quarter, steel industry losses were around Rs. 6000 crore and in December there was an increase in demand and price increased by 119%. Rao said government-aided large infrastructure projects were guiding current steel dem and along with a sharp pick-up in the two-wheeler, commercial vehicle, and tractor segments. Due to continuing government projects, they are accepting the same demand next year too.

According to the new Industrial Code 2020, Private companies in India can hire as many workers as they like using the the fixed term contract route without going through the contractor . Due to this new reform it helps industries hire seasonal workers for a short term period and allow these industries to save the cost and effort by hiring people without an intermediary.

2)      UK Based Kalrock Capital and UAE entrepreneur Murari Lal Jalan have been chosen as the new owners of the the Jet Airways and the  formal takeover process will begin and conglomerate plans to operate Jet as the Indian carrier. But Karlock and Jalan have not made any comment on the on-going resolution process.

3)      Amazon sends a legal notice to the promoters of Future Group in breach of the contract over the deal with Reliance Industries. In August 2020 Reliance retail Venture acquired the retail , wholesale ,logistics and warehousing business of Future Group but last year 2019 Amazon brought a 49% stake in the future Coupons and according to this deal Amazon said Future Group did not meet the criteria of its deal with RIL.

4)      During the Lockdown period Wipro has made good acquisition of companies in European & African regions and due to this they are estimating good profit figures in coming period. Due to this Wipro Board considers the plan to buy back the stock.

5)      Indian Equity Market climbs a new high after April 2020. The reason behind the sixth straight day high is because US Congress should pass money for airlines, small businesses  and stimulus packages for individuals.

6)      23 Private, Indian Companies start bidding to run a passenger train on 109 important routes in India. The Railways also clarified that complete freedom will be given to the private partner in procurement of trains, which can either be purchased or taken on lease. Railway has specified the money that companies have to pay it as haulage charges.